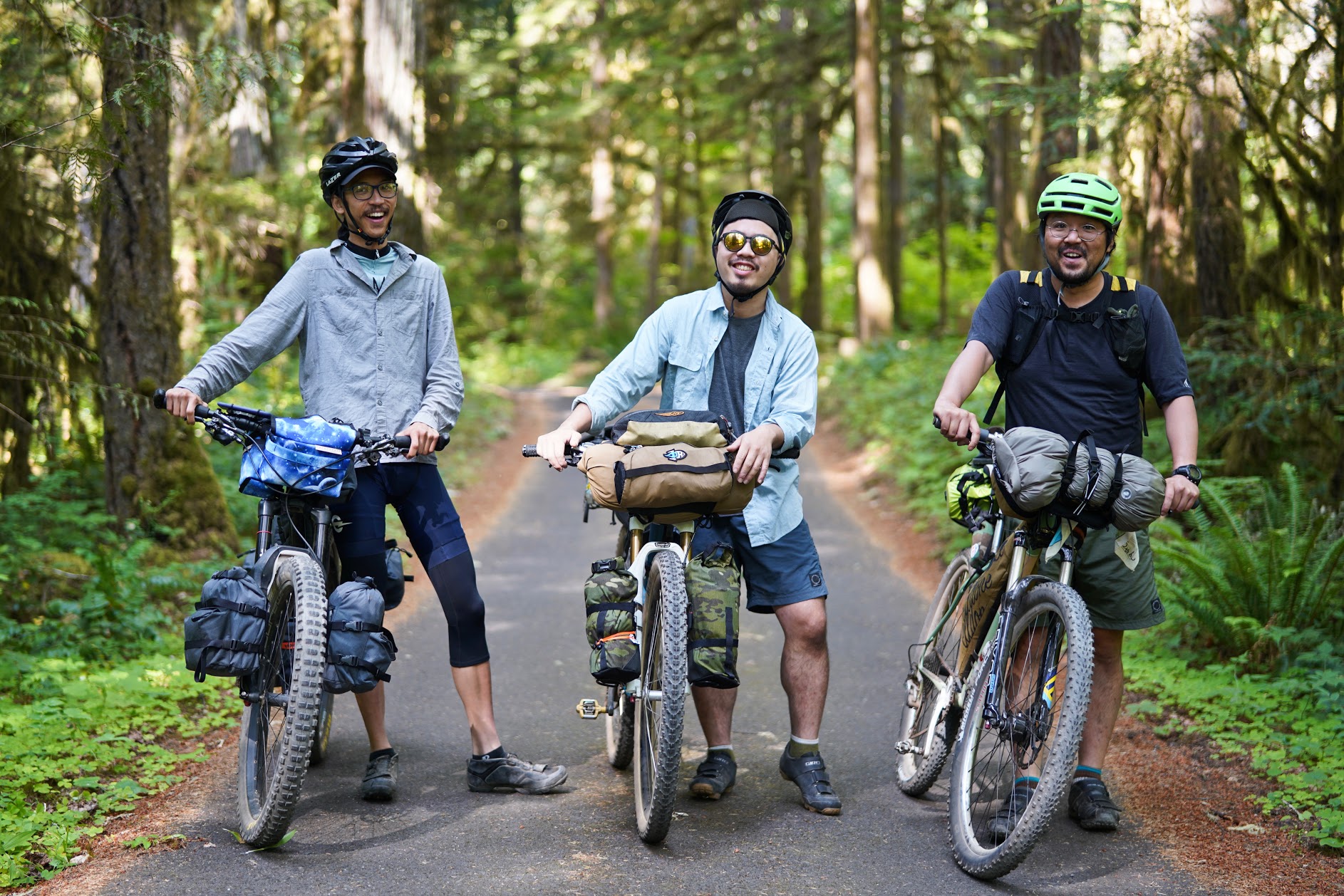 Bikepacking is about fastening all mountain tools you need on a bike, wearing wide fat tires with knobs, camping, and riding through any kinds of environment from on-road to a single track. I started getting to know about this since SimWorks introduced me to Porcelain Rocket 7 years ago which they make custom frame bags, saddle bags, and other different size bags for bike touring.

We actually might not need any definitions for backpacking, but for me I felt directly that this is something totally different from a classic touring bike. I wondered how any of these functional and durable frame bags, seat bags, and handle bar bags were created through? and the more I saw this bikepacking, riding a long trail by carrying light and high-performance equipments on a mountain bike, on SNS, I started feeling strongly that I needed to try it.

I had actually already decided to do bikepacking in the United States from a few years ago, even though I was worried if I was able to ride through a land that I had never been and I only had an experience that I did 3 days and 2 nights camp riding at RIDEALIVE presented by Circles every year. It became 2018 already and I could not decide where to go at all… Although doing a net surfing to look for my best route, but still could not find any of “THIS IS IT” place.

One day, I think it was in March, my buddy INOCCHI, the founder of WellDone, e-mailed me saying, “I found the dope route dude.” That was the route we tried at this time, Oregon Timber Trail.

We finally found a trail which has 1080 km (671 Miles) from New Pine Creek: a state border of California state, to Foot River: a state boarder of Washington state. We searched for any information about this trail trough its official website and all the hashtags one by one. It was very fascinating to look for more information we need.

Their website is designed pretty much well to look into information easily and detailed route is traced on the map: Trailhead, campsite, lodge, water supply point, a small shop and other life line information is marked and written. Coincidently, we found that Dylan, whom I met when Chris King came to Japan is also a part of this trail project, so that we got excited to the maximum point saying, “No other places are better than here!”, and tried to read all the text by using Google translate everyday. I heard that July is the perfect season in Oregon and no more rainy season at all. It seemed everything became on our side and real, and could not sleep at all because of it.

Since our mountain bikes are Cielo and DeSalvo, which are both made in Oregon and they were going to ride on their motherland soil, Oregon Timber Trail, it gave us an unique spirit of adventure. Therefore, we named this touring as “BACK TO OREGON TOUR”.

A breakfast chef and a bag craftsman in Nagoya joined a bag craftsman in the U.S. We started OAKRIDGE: a country side in Central Oregon and rode on a trail about 600 km (373 Miles) with bikepacking last summer 2018, and now I am going to talk about how my 11 days were through my trip memories.

Oregon Timber Trail is divided into 4 different section: FREMONT, WILLAMETTE, DESCHUTES, and HOOD. Moreover, their official website has more details about their each distance, elevation gain, estimation days, and difficulty. By taking our schedule and physical strength into consideration, we decided to start from the city called OAKRIDGE, which is the latter part of WILLAMETTE, and made up our minds to complete riding for 600 Km (373 Miles) within 2 weeks.

In order to avoid misunderstanding, a purpose of this bikepacking was not because we wanted to find ourselves in this journey, it is because we wanted to feel a magnificent nature of Oregon directly. We didn’t want to get ourselves busy all the time; we also love to enjoy foods in our own pace, making a bonfire, drinking beers, talking each other deeply, meeting people on the way, yielding ourselves to Mother Nature, relaxing all the time, and getting out of everyday busy life.

In the results, the way we enjoyed ourselves was perfect and we needed ‘Bicycle’ in order to make it happen.

Fellows who had a journey together

A man who I traveld with is the owner of WellDone; his name is Inocchi who works under the same roof of Circles. He has his own studio at 3rd floor of Circles and produces cyclecaps and hiking bags. Not only a cycle culture, but also he specializes his knowledge in a hiking culture as well, so that he is in high demand for a lot of pop-up events nationwide.

One more person who I traveled with is the founder of a bag maker called OUTER SHELL in California, and his name is Kyle. I’ve known him through SNS and Rie from SimWorks USA introduced him to us, so that he also kept a company with us on this trip. He bases in San Francisco and such a nice guy.

Two days before the beginning of our bikepacking journey, we rode on SANDY RIDGE MOUNTAINBIKE TRAIL with Chris King crew and on the day before, we rode on DEAD MOUNTAIN TRAIL in Oakridge, and those trails were extraordinary downhill we’ve ever ridden. It was also an important time to check our bikes themselves and all the equipment we brought up. Luckily, we found some problems on our bikes, and we were able to fix and improve them much better, so we strongly recommend you a pre-ride before a long touring journey.

Our route map at this time was RIDE with GPS. A fine app we found on the internet.

We said good-bye to Rie from SimWorks USA in OAKRIDGE and finally started to proceed forward onto a dirt road which was 20 km with 1200m up, which we thought that it was the most difficult place to go through on our first day.

We knew that it was going to be hard… We knew it, but damn so hard….

The temperature went up higher and higher and I couldn’t see any shades on the way. I kept climbing up for about 3 hours straight and had a lunch break after that. I wasn’t familiar with this GPS map app so that I had no idea where we actually were, but I didn’t care about it since I was just simply hungry. An instant fried rice I bought in the U.S. wasn’t bad, but not even delicious at all, and when I took a look at Inocchi, he was eating DONBEI, an instant udon noodle which he brought it from Japan. I slurped some, and it was damn good. I do respect DONBEI.

After we finished our lunch, we started riding again. We needed to push our bikes on some of the slopes and it continued for a long time. We finally found a trail head then a single track went on in front of us. We got excited about being on a single track so that our pedaling got little bit stronger. There were huge fallen trees on the way, and we needed to carry our bikes one by one. On a steep slope, we got off from bikes and walked little by little. Sometimes, things went so smooth, but sometimes we needed to stop and got off the bikes. It just repeatedly happened. However, the beautiful scenery of Oregon sometimes appeared while we were taking a deep breath, and we couldn’t even express how it was in words.

When we reached to 1800m altitude, Kyle told us that we were going to go over that mountain which he pointed at seemed the end of the world. That made us both feel of despair…

An expected plan on our journey we had prepared had been used up already within a half day since we started, and we easily expected to arrive at a campsite right next to Gold Lake which was located 50km from the start point, but to tell you the truth, we were lost at 27km point around 4pm in the afternoon.

The most important thing besides our lives = Water

Since our water was getting low, we headed to a water supply point which was located little bit off the route.

We saw a steep slope right in front of us, so we left our bikes on our route, and walked through a bush along with an orange sign nailed on trees. GPS told us that we were right on the spot, but couldn’t find any around. We walked around and around to find the water supply spot, but we figured out that the well had dried up.

I couldn’t help myself laughing so much because I got shocked too much. Moreover, a huge rock right next to that point said, THE END OF THE WORLD.
How dramatic was that? It seemed everything went so well, huh?

We needed to put our negative feelings behind and move on before it got dark and headed to Small Lake which was 10km ahead on the map.

After this incident, we talked less, so that we had to encourage each other in order not to lose our concentration.
I talked to myself a lot in my heart saying, “I totally underestimated you…Oregon Timber Trail….”

It became completely dark around.

We had a light hunger knock.

I will never forget how Inocchi screamed when he drank up all the water, “I have noooooo wateeerrrr….!! Please give me sooooooooome….”

We finally found a lake after 10pm, and decided to sleep there. We cheered with warm beers and ate dinner. I didn’t even taste anything at that time, but I remembered that we gave high praise to ourselves that we all survived through. I was almost going to fall asleep right after I built a tent, but I heard some noise from a direction that 2 of my fellows shouldn’t have been. I was scared, but luckily I feel asleep completely. When I woke up and got outside, then I saw deers walking around.

It was a cold morning and wore a warm clothing. I didn’t notice that Small Lake was bigger and more beautiful than I thought since it was dark when we got there. One more thing, yes, Mosquitos started getting annoyed for the entire tour.

Full of hopes on the first day was pretty much hard, and the goal: Foot River, which is 600km ahead seemed very very far from where we were.

Actually, the first day was the hardest on this journey, but still remembered how beautiful the scenery it was.

Yes, that was a sense of accomplishment we wanted for this journey for sure.

A word of ‘CUSTOM’

BETWEEN YOU AND ME